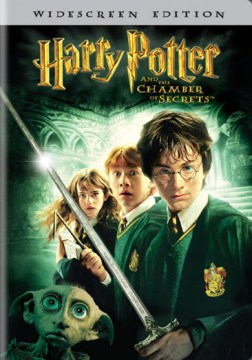 Harry Potter and the Chamber of Secrets

I think this was better than the first.

All of the Harry Potter movies are well done.

Each one has different aspects and each year the kids move forward a year.

Dobby is a pretty good character though has a difficult time getting kudos since he appears to be trying to save Harry, pretty much, by killing him.

This is my least favorite Harry Potter movie but it is still super amazing and definitely worth watching.

In my review of the first movie - I mentioned how hard it was to see the movie because of the bad acting, and in this one, you see a little bit of improvement. But at the end of the day - it's really just a nostalgia film, one you have to see to understand the final movie - yet a non-Harry Potter fan would be like what is happening.

In my review of the first movie - I mentioned how hard it was to see the movie because of the bad acting, and in this one, you see a little bit of improvement. But at the end of the day - it's really just a nostalgia film, one you have to see to understand the final movie - yet a non-Harry Potter fan would be like what is happening.

Once again, Harry Potter and the Chamber of Secrets magnificently brought the book to life! The acting was fantastic, the special effects were amazing, and the story line is like no other! There are some new characters introduced, which you’ll fall in love with! Every little detail of the movie flawlessly interweaves into a captivating plot, filled with mystery, action, and adventure! The resolution to each problem is so clever and developed, and keeps you eager and engaged throughout the entire film. I definitely recommend this movie, along with the rest of the franchise! This movie has everything that you would want in a film! 5/5
@PenelopeScriptor of the Hamilton Public Library's Teen Review Board

Chamber of Secrets is the second installment of Harry Potter and his adventures at Hogwarts School for Witchcraft and Wizardry, based on the best-selling novel series by J.K. Rowling. The plot follows Harry’s second year at Hogwarts, during which a series of messages on the walls of the school’s corridors warn that the “Chamber of Secrets” has been opened and the heir of Slytherin would kill all pupils who did not come from all-magical families. These threats are found after attacks which leave students petrified. Throughout the year, Harry and his friends investigate the attacks. This movie was pure magic between the graphics which have gotten better, the plot which left me wanting more, and the portrayal of some of my favourite characters (Gilderoy Lockhart). Compared to the first film, the mood had seemed to darken a bit as it started to show how some wizard families have extreme prejudices. Rating – 5/5.
@Average_Bookworm of the Teen Review Board at the Hamilton Public Library

The Chamber of Secrets is the second movie based on J.K. Rowling’s Harry Potter series. This time Harry is about to start his second year at Hogwarts School of Witchcraft and Wizardry. The movie starts off with Harry sad because he has not received any letters from his school friends, Ron and Hermione. Then he finds a house elf, named Dobby, hiding in his room who warns him not to return to Hogwarts this year because he will be in danger. Ignoring the house elf, Harry and Ron find themselves blocked from entering platform nine and three-quarters to get to the Hogwarts Express. This year, Harry will definitely have to watch his back as it seems that someone is watching him. If you enjoyed the first Harry Potter movie, I would recommend watching the second as they stay true to the novel. This movie is also an opportunity to see a little bit of the wizarding world before Harry Potter’s time. It’s also good to watch if you want to know if reading the novel is right for you. Overall, I would rate this movie four out of five stars.
@SapphireReads of the Hamilton Public Library Teen Review Board

vaasu thinks this title is suitable for 12 years and over

white_wolf_1351 thinks this title is suitable for All Ages

Samcat10 thinks this title is suitable for 8 years and over

brown_rabbit_154 thinks this title is suitable for 11 years and over

blue_snake_1784 thinks this title is suitable for 22 years and over

lula_18 thinks this title is suitable for 8 years and over

AShan99 thinks this title is suitable for 8 years and over

blue_raccoon_123 thinks this title is suitable for All Ages

A mysterious elf tells Harry to expect trouble during his second year at Hogwarts, but nothing can prepare him for trees that fight back, flying cars, spiders that talk and deadly warnings written in blood on the walls of the school.

The other summary'scover it but I'm gonna write anyway.

After a long boring summer with the Dursleys, Harry Potter is back at Hogwarts School of Witchcraft and Wizardry.....

Harry Potter (Daniel Radcliffe) is back for his second year at Hogwarts. He rejoins his friends Ron Weasly (Rupert Grint) and Hermione Granger (Emma Watson). But the Chamber of Secrets has been opened for the first time in 50 years, and now the trio has to venture in to get back Ron's sister, Ginny (Bonnie Wright). Directed by Chris Columbus, J. K. Rowling's second breathtaking novel is put onto the big screen.

Harry is returning for his second year at Hogwarts School of Witchcraft and Wizardry, but there is a monster among them, slowly petrifying all mud-bloods in the school.

Violence: Has blood in it

"Is everthing alright Harry, is there anything you need to tell me?"- Dumbledore
"No sir, nothing." -Harry Potter