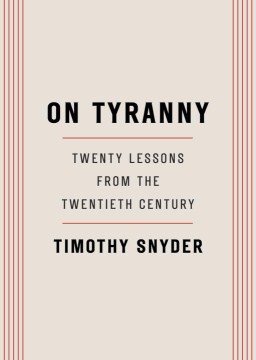 Twenty Lessons From the Twentieth Century

In previous books, Holocaust historian Timothy Snyder dissected the events and values that enabled the rise of Hitler and Stalin and the execution of their catastrophic policies. With Twenty Lessons, Snyder draws from the darkest hours of the twentieth century to provide hope for the twenty-first. As he writes, "Americans are no wiser than the Europeans who saw democracy yield to fascism, Nazism and communism. Our one advantage is that we might learn from their experience."
Publisher: New York : Tim Duggan Books, [2017]
Edition: First edition.
Copyright Date: ©2017
ISBN: 9780804190114
0804190119

A slim volume that fights well above its weight. This is a clear call for individual responsibility in observing, learning and acting. There are lessons from history in each chapter, warnings connected with each event, and simple suggestions for personal responses. It can happen here.

I recently happened to read about a somewhat informal survey that had been taken in a dozen "emerging nations" asking people at random whether they preferred the "western' model of democracy or the Chinese "people's republic" model as one for their governments to emulate. A majority spoke in favor of the Chinese model, which at first seemed surprising until I read a bit more, offering a sampling of interviewees' comments. People's reasons were often vague or not given at all but a couple of themes did emerge.
Some alluded to the rapid economic development of China and the Chinese ability to make decisions quickly and get things done, even very large projects, without a lot of argument or protest. Others noted that western democracies seem to be suffering a lot of internal upheaval, with noisy demonstrations and frequent regime changes where multiple political parties have difficulty forming a government and remaining in power. There are a lot of arguments about policy, rights, accountability; democracy seems to be an unstable system.
And I noted that all of this is true. Democracy is messy. Reading this book helped me to understand why those people responded in the way they did. Tyranny is simple. One has no need to reason things out, take responsibility, consider alternatives, seek nuanced solutions to complex problems. Tyranny replaces facts with slogans, replaces debate with commands.
The twenty lessons in this small book all have one thing in common: they require citizens to act like responsible members of society, think independently, take control of their destiny, act courageously in defense of liberty, value truth whether that truth be rosy or grim. These behaviors are not for the faint of heart, the lazy of mind or the weak of values.
Some readers have declared that this little book should be required reading for everyone who aspires to political office or civic leadership. The question in my mind is whether those who ought to read it and take it to heart today have the stomach for it.

I guess there's some value in pointing out the bleeding obvious. There's nothing here that hasn't been beaten to death previously, nothing new at all, which isn't terribly surprising in what's really a long magazine article (well under 20,000 words) masquerading as a book. (The publisher seemingly used every standard layout trick to increase the page count.) Those interested in a brief exploration of totalitarianism would do better to check out Jason Stanley's "How Fascism Works" (also available via the library).

Are we doomed to repeat history? Only if we fail to learn its lessons.

Prof. Snyder presents with a list of warnings that are currently in abundance which we must not ignore if we wish to preserve our freedom.

Pertinent and thought-provoking book, should be required reading for all nowadays.

This was a great book. I think everyone should read it and if you can get it in your private collection ever better. Snyder talks about history lesson on how people were excluded in the past with past Nazi Germany examples. Snyder also talks about other governmental establishment that did work. But most importantly how as citizens we should be more involved so histories past such as those he writes about do not happen again.

This book hits the right points. I read this book after reading a book on the rise of Nazi Germany, and the points it makes highlight what happened there, and why. It is a very short read (126pp), but well worth the time.

I am wondering why such an important topic is delivered in the form of tiniest book size ever? Just to be published and go “under the radar”? Anyhow, you need to start with this one and continue broadening your views with many others.... The Origins of Totalitarianism by Hannah Arendt for example....

Lesson number one: Do not obey in advance (anticipatory obedience is a political tragedy)
Lesson number five: Remember professional ethics (do not confuse ethics with the emotions of the moment)
Lesson number eight: Stand out (It’s easy to follow along...)
Lesson number nine: Be kind to our language (Avoid pronouncing the phrases everyone else does....)
Lesson number seventeen: Listen for dangerous words (...by manufacturing a general conviction that the present moment is exceptional, and then transforming that state of exception into a permanent emergency....)

Excellent book about what is happening in America, and the similarities of this and previious problems and times in other countries. SHould really make you stop and think. Would have been good to read the last 4 years, but better late than never.

Fantastic. A must-read before the next election.

Since in the age of the internet we are all publishers, each of us bears some private responsibility for the public's sense of truth.

Modern tyranny is terror management. When the terrorist attack comes, remember that authoritarians exploit such events in order to consolidate power. The sudden disaster that requires the end of checks and balances, the dissolution of opposition parties, the suspension of freedom of expression, the right to a fair trial, and so on, is the oldest trick in the Hitlerian book. Do not fall for it.

People who assure you that you can only gain security at the price of liberty usually want to deny you both.

Our appetite for the secret, thought [political writer Hannah] Arendt, is dangerously political. Totalitarianism removes the difference between private and public not just to make individuals unfree, but also to draw the whole society away from normal politics and toward conspiracy theories. Rather than defining facts or generating interpretations, we are seduced by the notion of hidden realities and dark conspiracies that explain everything.

Protest can be organized through social media, but nothing is real that does not end on the streets. If tyrants feel no consequences for their actions in the three-dimensional world, nothing will change.

"Professions can create forms of ethical conversation that are impossible between a lonely individual and a distant government. [...] Professional ethics must guide us precisely when we are told that the situation is exceptional. Then there is no such thing as 'just following orders'."

The mistake is to assume that rulers who come to power through institutions cannot change or destroy those very institutions.

MichaelECasey thinks this title is suitable for 13 years and over

In On Tyranny, Yale History professor Timothy Snyder offers twenty principles for resisting authoritarian government, drawing cautionary examples from twentieth century European history. It grew out of a Facebook post Snyder made in the aftermath of America’s 2016 election. In it, he attempts to bring his wide knowledge of European history, and the collapse of democracies, to bear on the current political moment.