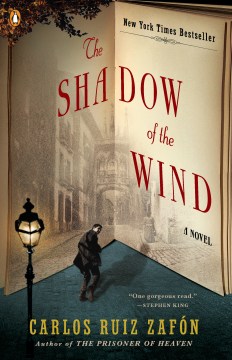 The Shadow of the Wind

A boy named Daniel selects a novel from a library of rare books, enjoying it so much that he searches for the rest of the author's works, only to discover that someone is destroying every book the author has ever written. Barcelona, 1945-just after the war, a great world city lies in shadow, nursing its wounds, and a boy named Daniel awakes on his eleventh birthday to find that he can no longer remember his mother's face. To console his only child, Daniel's widowed father, an antiquarian book dealer, initiates him into the secret of the Cemetery of Forgotten Books, a library tended by Barcelona's guild of rare-book dealers as a repository for books forgotten by the world, waiting for someone who will care about them again. Daniel's father coaxes him to choose a volume from the spiraling labyrinth of shelves, one that, it is said, will have a special meaning for him. And Daniel so loves the novel he selects, The Shadow of the Wind by one Julian Carax, that he sets out to find the rest of Carax's work. To his shock, he discovers that someone has been systematically destroying every copy of every book this author has written. In fact, he may have the last one in existence. Before Daniel knows it his seemingly innocent quest has opened a door into one of Barcelona's darkest secrets, an epic story of murder, magic, madness and doomed love. And before long he realizes that if he doesn't find out the truth about Julian Carax, he and those closest to him will suffer horribly. As with all astounding novels, The Shadow of the Wind sends the mind groping for comparisons- The Crimson Petal and the White? The novels of Arturo Peacute-Reverte? Of Victor Hugo? Love in the Time of Cholera ?-but in the end, as with all astounding novels, no comparison can suffice. As one leading Spanish reviewer wrote, ldquo. The originality of Ruiz Zafoacute's voice is bombproof and displays a diabolical talent. The Shadow of the Wind announces a phenomenon in Spanish literature. An uncannily absorbing historical mystery, a heart-piercing romance, and a moving homage to the mystical power of books, The Shadow of the Wind is a triumph of the storyteller's art.
Publisher: New York : Penguin, 2004.
ISBN: 9780143034902
0143034901
9781594200106
1594200106

The book caught my eye several years ago and I decided to read it to fulfill a reading requirement for a book challenge. I could not have been more thrilled with my choice. What an awesome book! Lots of plot twists and turns as the main character, Daniel, sets out to find more books by Julien Carax when he discovers and reads the book “the Shadow of the Wind” from the Cemetery of Forgotten Books. I had hardly wait to dive into the rest of this series as this book has left me wanting more.

I read this book to fulfil the goal read a book that has a book on the cover. it was amazing. It is the story of the hunt for the perfect story. the whole time i was reading it i was thrilled to read the perfect story. i too wanted to read the book the boy had read. it took me a while to realize that the finding the author was the story. by then i was hooked. I had to find out how the story ended. when it finally did end i cried. i'm still not sure why except the story really moved me.

Another great book by this author. some of the same characters return and I love the idea of the Cemetery for Lost books. It was interesting how the author uses the civil war and its effects on regular citizens.

Enjoyed the book. I did the audio version. Love the idea of a cemetery of forgotten books and the mysteries that come out of it. Has strong male characters. Can be long at times, but worth it in the end. I also listened to the prequel to this book.

Wow. Increíble, de verdad. I think any true lover of books should read this novel.

If you enjoy syrupy melodrama, endless embellishments, and incredulous plot twists then this is your book.

A fantastic read. Thoroughly enjoyed it. Am looking forward to reading more of is work.

The writing and storytelling in this is incredible. It isn't a fast read or a light read but it IS worth it. It really comes together, revealing the mystery and the truth of the characters.
I'd recommend this to anyone who is a fan of historical fiction, the setting of post-war Barcelona was really interesting. In 3 words; dark, romantic and mysterious.

Someone once said that the moment you stop to think about whether you love someone, you've already stopped loving that person forever

"The female heart is a labyrinth of subtleties, too challenging for the uncouth mind of the male racketeer."

"Real women are won over bit by bit."

"One of the pitfalls of childhood is that one doesn't have to understand something to feel it. By the time the mind is able to comprehend what has happened, the wounds of the heart are already too deep."

"There's no such thing as dead languages, only dormant minds."

Once, in my father's bookshop, I heard a regular customer say that few things leave a deeper mark on a reader than the first book that finds its way into his heart. Those first images, the echo of words we think we have left behind, accompany us throughout our lives and sculpt a palace in our memory to which, sooner or later—no matter how many books we read, how many worlds we discover, or how much we learn or forget—we will return.

There are worse prisons than words Daniel

I still remember the day my father took me to the Cemetery of Forgotten Books for the first time.

Barcelona, 1915 to1956. Daniel a book dealer's son, mourning the death of his mother, find solace in a mysterious book, The Shadow of the Wind by Julian Cara . But when he seeks other books by the author he cannot find any nor the author.
Mysteries abound and secrets as well. 490 pages. Fasinating and fille with descriptions of Barcelona and Paris.

A young boy is shown a secret sanctuary for forgotten books by his father. He finds a captivating book that he cannot put down. Once finished he is determined to read other books the author has written. But someone is burning every book he ever wrote. Daniel is determined to uncover the mystery behind the book and sets off on a journey that will bring new friends, danger, romance and adventure. Join Daniel as he discovers what really happened to Julian Carax.

In a Barcelona that is still recovering from the Spanish Civil War, a boy named Daniel becomes entranced by a book named The Shadow of the Wind written by an obscure author named Julian Carax. However, as he rabidly searches for more of his books, he comes to discover that someone is systematically destroying every book written by Carax. The identity of this mysterious author lies at the heart of a tale filled with such intrigue, murder, heartbreak, and madness. Daniel realizes that someone is willing to go to any lengths to keep it hidden, and he is prepared to go to the same lengths to uncover the truth.

Violence: Many graphic descriptions of torture, violence and death.

nadian thinks this title is suitable for 14 years and over