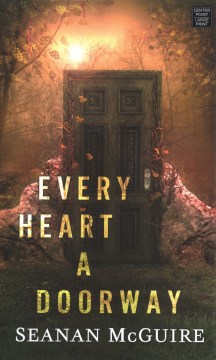 Every Heart A Doorway

"Children have always disappeared from Eleanor West's Home for Wayward Children under the right conditions; slipping through the shadows under a bed or at the back of a wardrobe, tumbling down rabbit holes and into old wells, and emerging somewhere ... else. But magical lands have little need for used-up miracle children. Nancy tumbled once, but now she's back. The things she's experienced ... they change a person. The children under Miss West's care understand all too well. And each of them is seeking a way back to their own fantasy world. But Nancy's arrival marks a change at the Home. There's a darkness just around each corner, and when tragedy strikes, it's up to Nancy and her new-found schoolmates to get to the heart of the matter. No matter the cost"--Provided by publisher.
Publisher: Thorndike, Maine : Center Point Large Print, 2020.
Edition: Center Point Large Print edition.
Copyright Date: ©2016
ISBN: 9781643584591
1643584596

I absolutely loved the concept of this story, what happens when Alice comes back from Wonderland? How does she cope with the real world again? This a was a thriller/horror/dark version of a what happens after.

I liked the trans, queer and just general acceptance of difference representation there was in this book. Nancy, one of the main characters is ace and Kade is trans. This is also connected to the different doors the characters go though as the worlds they enter are connected to their personality.

I felt like things started happening very quickly with Nancy's roommate suddenly dead and now they're trying to find the killer when we barely know the different characters who are at the 'asylum' with Nancy.

Overall I just don't think there was enough of this book as we didn't get to really know or connect with a vast majority of the characters. There is also a lack of conclusion for the characters. The killer is dead but I have no idea what happens to Kade and Nancy.

As someone who considers themselves Ace (I have an aversion to labels - they feel so concrete and permanent) I am also not sure how I feel about Nancy's relationship with Kade because I am against pushing Ace characters into a relationship so that they seem normal but I am also not averse to dating and felt her art comparison was mostly accurate though I would say "you can appreciate a painting but you wouldn't want to f*** one." might be a little to adult for the intended audience though! I also have no idea on own voices rep for this book.

1.5 * I have seen this book for 2 years and have seen reviews. So when I got a copy of it I was so excited to read it. The concept of this book was so intriguing... I mean was Alice in Alice in wonderland relived to be home, or did she miss wonderland? But, at last this book just felt short for me. I did find myself caring one way or another for the kids in this book. What they were going through, as well, did not line up with the way they reacted. I've heard that the second book got even better reviews, but i think I'll stop here and go on to another book series.

I love this series! They are quick reads with interesting diverse characters. This does have the Asexual goes to the underworld trope. At this point I will take anything I can get when it comes to ace representation. But this has just been a minor warning. The story is really entertaining, but if you are looking for major character development this book is a bit short for that.

I got into this book by mistake. Too childish for me. Call it Very Young Adult ...pre-teens.

I checked this out based on a review left by a member. Loved it!! Fast, interesting read.... I wonder why YA 'fantasy' fiction is so much better than adult lately ie: Hunger Games. If you're looking for a quick escape into a different 'verse check this little gem out!!!

This felt like a love letter to the stories I grew up loving, to the stories that I wanted so badly to live in. It was magical and creative and so, so lovely.

Nancy has returned to the world as we know it after disappearing through a doorway. Now, her parents have sent her to Eleanor West’s Home for Wayward Children, hoping that their daughter will return to how she was before she disappeared. Because Nancy is different, full of stillness now instead of joy and colour. But Nancy only wants to go home, and how can any school change that when that home is an Underworld with a door that won’t manifest again?

The idea of multiple realities that can be accessed through doorways/closets/rabbit holes/cracks in the wall/etc. isn’t new, but combining all of them in this format is, and oh god did I love it. The way worlds fall on a spectrum, Nonsense and Logic and Wickedness and Virtue, just makes so much SENSE immediately that it really is like it’s real. Like this school exists and these worlds exist and of course they always have, of course, duh. I loved how tangible everything feels, concept-wise with this one.

Character wise, the diverse cast is marvellous. There’s such a range of personalities and identities and none of it ever feels stereotypical. I really related to Nancy and liked her immediately, and the friends (and foes) she meets along the way are vibrant and interesting.

I just...I really wish this was longer. I blasted through it and just felt like I was really getting to know everyone and then it was over. I wanted to savour the mystery more, relish the twists and the worlds and live in the pages for a little bit longer. However, I think what we have here works, really works, and I can’t wait to see how Seanan deals with the rest of the books in this series.

Very well written. The plot goes very fast, however it is a short book. Does very well to expand on the idea of what happens after kids get back from Fairyland

McGuire weaves a story about what happens to all the kids who go to "other" worlds through wardrobes, mirrors, rabbit holes, etc when they return to their previous life. It is an entertaining quick read and a nice distraction from today's world.

The books checks off lots on the inclusivity list which I was very happy about. I loved this story! Looking forward to the next one!

“Her parents loved her. There was no question of that. Their love wanted to fix her and refused to see that she wasn’t broken.”

“Kade made a brief, bitter speech about how Wickedness and Virtue were just labels and didn’t mean anything. The world he’d been to was labeled Virtue on all the maps, but it had still cast him out as soon as it realized what he was.”

The habit of narration, of crafting something miraculous out of the commonplace, was hard to break. Narration came naturally after a time spent in the company of talking scarecrows or disappearing cats. It was, in its own way, a method of keeping oneself grounded, connected to the thin thread of continuity that ran through all lives, no matter how strange they might become. Narrate the impossible things, turn them into a story, and they could be controlled.

We went down the mysterious stairs that couldn't possibly be there, of course. Who wouldn't go down an impossible staircase in the bottom of a trunk? We were twelve. We were curious, and angry with our parents, and angry with each other. . . . The door slammed shut behind us. We couldn't have gone back if we'd wanted to--and we didn't want to. We were twelve. We were going to have an adventure if it killed us.

This is not an asylum, and you are not mad--and so what if you were? This world is unforgiving and cruel to those it judges as even the slightest bit outside the norm. If anyone should be kind, understanding, accepting, loving to their fellow outcasts, it's you. All of you. You are the guardians of the secrets of the universe, beloved of worlds that most will never dream of, much less see . . . can't you see where you owe it to yourselves to be kind? To care for one another? No one outside this room will ever understand what you've been through the way the people around you right now understand. This is not your home. I know that better than most. But this is your way station and your sanctuary, and you will treat those around you with respect.

"For us, the places we went were home. We didn't care if they were good or evil or neutral or what. We cared about the fact that for the first time we didn't have to pretend to be something we weren't. We just got to be. That made all the difference in the world."

“We went down, and at the bottom there was a door, and on the door there was a sign. Two words. ‘Be Sure.’ Sure of what? We were twelve, we weren’t sure of anything. So we went through."

"This world is unforgiving and cruel to those it judges as even the slightest bit outside the norm."

"Hope means you keep on holding to things that won't ever be so again, and so you bleed an inch at a time until there's nothing left."

"Where did you find the whipped cream?” he asked. “You had milk, I had science,” said Jack. “It’s amazing how much of culinary achievement can be summarized by that sentence. Cheese making, for example. The perfect intersection of milk, science, and foolish disregard for the laws of nature."

haushallmartinez thinks this title is suitable for 12 years and over

black_cat_3930 thinks this title is suitable for 12 years and over

SilverIlix thinks this title is suitable for 12 years and over

A long time ago, a little girl named Ely West found a doorway, and went on an adventure to a Nonsense world, where she was very happy, until one day she was too grown up to tolerate all the nonsense. Now Eleanor West runs a school for other children who have found doorways that led them home, only to be forced back into a mundane world where no one understands what happened to them. No one except Eleanor. The newest student at Eleanor’s school is Nancy Whitman, and she has just returned from the Halls of the Dead. After years spent perfecting the art of stillness for the Lord of the Dead, everything about this world seems too hot, and fast. Her parents insist on things being just like they were before, meaning colourful clothing, regular meals, and dates with boys, even though Nancy has realized she is asexual. So Nancy is sent to Eleanor’s school to recover from her “ordeal,” and there she meets other children who have had the same experiences. But soon after Nancy arrives, someone begins murdering students.