Saved Searches Advanced Search
Under the guidance of the CA Department of Public Health and San Diego County’s Public Health Officer, 12 San Diego Public Library locations are open for limited in-person services Monday – Saturday, 9:30 am to 5:30 pm and will be closed from 1-2 pm for cleaning. Online library services, Contactless Holds Pickup, and all book drops are available to the public. Find specific information on operations. 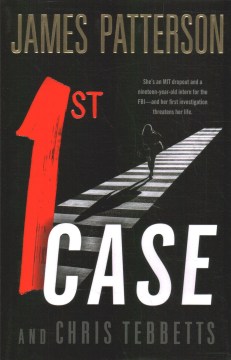 Great book. I am always very concerned and skeptical when I pick up a book with Patterson's name on it because the "value/interest" of the book lies in the co-author.
So many of Patterson' ghost writers are not very good and apparently Patterson doesn't care. Is Patterson still alive?! In any case, the story line has a lot of computer/internet savvy and is well worth reading.

I felt this book was a little like a debut novel in the sense Angela makes a lot of rookie mistakes. I can't believe the FBI would be so careless. The story is good and I liked the character of Angela as a tech genius but the novel progresses with a lot of mistakes. Not a bad read.

What a great book. Suspense at every corner and you will not want to put this book down.
Enjoy!!!

1st CASE by James Patterson and Chris Tebbetts is a really well crafted story. Character development is great. Most of the main characters are late teens to mid-thirties; which makes perfect sense because this story is as much about modern hi-tech hacking as it is about murder and kidnapping. No more spoilers. Enjoy.

One of Patterson’s better books! Loved the dialogues and character development. The plot had me guessing. Very enjoyable read. My work was getting in the way of completing this book. Highly recommended.

This was really good. I sure hope he makes it into a series!

I loved the book! I couldn't put it down. I would describe it as a computer geek meets mystery and thriller. I hope Patterson and Tebbetts follow through with a series. I would definitely want to know what happens with Angela at Quantico. If you haven't started reading any Patterson books, I would recommend starting off with this one! :)

Though I enjoy nonfiction more than fiction, all of James Patterson's books are amazing reads! He reminds me in a way of Stephen King (but more real).
From the site "Goodreads"
4.5 out of 5 stars
THE NEW THRILLER FROM WORLDWIDE BESTSELLING AUTHOR JAMES PATTERSON
Angela Hoot is a young tech genius. But when she's kicked off her Masters degree course at MIT for hacking into the computer of a fellow student, she fears she's blown her chances of a glittering career.

Angela is wrong. Instead, she's offered a dream internship with the FBI. She jumps at the chance, and is thrown straight into her first case at house in the Boston suburbs where a family of five have been brutally murdered.

As Angela struggles to overcome the painful reality of her new job, a phone is found that could hold the secrets of this mass murder – if Angela is unable to uncover them.